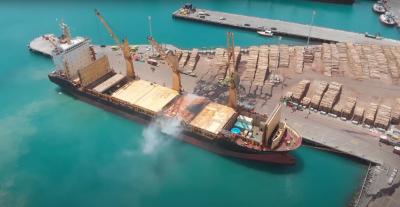 Aerial photo of Kota Bahagia showing smoke from the fire on board © James Hooker, with permission
General cargo vessel Kota Bahagia, Cargo hold fire, Napier Port, 18 December 2020
Status
Closed
Occurrence Date
18 Dec 2020
Report Publication Date
4 Aug 2022
Jurisdiction
NZ
What happened
During the morning of 18 December 2020, cargo discharge operations were underway on board the Kota Bahagia at Wharf 4, Napier Port. Four people working in number 2 cargo hold discovered a rapidly evolving fire in the cargo hold and evacuated immediately. With the local fire service in attendance, the fire was suppressed using the on-board carbon dioxide fire-suppression system. The fire was officially declared as extinguished on 24 December 2020. There were no fatalities or injuries, but there was extensive damage to number 2 cargo hold and high-value project cargo in the hold.

Why it happened
Molten material, ejected during gas-cutting activities, very likely ignited dry sawdust nearby, which created a smouldering fire that ignited the polyvinyl-chloride tarpaulins and other combustible components of the fibre-glass project cargo.

Hot-work precautions were not fully implemented by the ship’s crew.

The tight stowage of the project cargo hampered the view and access of the person assisting with the gas-cutting operations. Consequently, in some locations there was no way to control effectively the dispersal of molten material ejected during the gas-cutting.

Fire and Emergency New Zealand responders did not initially give due regard to the master’s command status and knowledge of the ship and its systems. Valuable time was lost as the master attempted to convey their intended tactics to the officer in charge of the unified command team.

What we can learn
Risk assessments and job safety analyses for hot work must give consideration to any constraints in the area where the hot work is to be carried out. The risk assessment should be applied systematically with monitoring to ensure the control measures are appropriate and effective.

A shipboard fire response is based on the vessel’s design, fire protection systems and crew numbers. During a co-ordinated incident response involving ship fires in a New Zealand port, the ship’s master might not be the incident controller. However, the master retains the overriding authority to make, and the responsibility for making, decisions regarding the safety and security of the vessel. The master is responsible for the safety of life on board, the care of the cargo and protecting the marine environment from ship-borne pollution. Fire and emergency responders need to take this into account as part of their responses to ship fires.

Who may benefit
Vessel operators and crew, charterers, freight forwarders, shore-based marine engineering contractors, maritime training facilities and shore-based emergency response agencies may all benefit from the findings in this report.