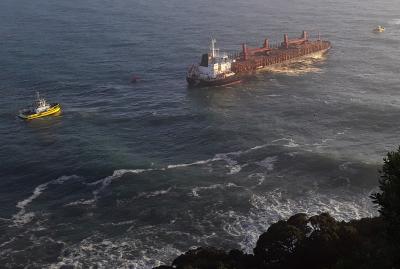 The Funing being assisted by Port of Tauranga tugs, off Mauao-Mt Maunganui. Photo_Stu James via SunLive
Bulk log carrier Funing, Loss of manoeuvrability while leaving port, Port of Tauranga, 6 July 2020
Status
Closed
Occurrence Date
6 Jul 2020
Report Publication Date
3 Feb 2022
Jurisdiction
NZ
What happened
On 5 July 2020, the log carrier Funing finished loading its cargo at the Port of Tauranga and began preparations for departure. At about 2200 the officer of the watch contacted the engineers and informed them that departure was planned for midnight.

The engineering team attempted to rectify the fault but were unable to before the vessel departed its berth at about 0018, when the fault reoccurred again on the main engine.

At 0024 the tugs were let go, and at 0027 the Port of Tauranga harbour pilot ordered full ahead. The vessel’s speed through the water was about 4.3 knots.

By 0043 the vessel’s speed through the water was about 0 knots, and its speed over the ground was about the same as the ebbing tidal stream of 3.5 knots. The vessel was effectively drifting with the current and moving out of the channel.

Shortly afterwards the vessel drifted over channel marker ‘B’ buoy and the buoy’s mooring chain became entangled in the Funing’s rudder and propeller.

Why it happened
The engineers identified a fault with the main engine during pre-departure testing, but they did not confirm it was rectified before departure.

Ineffective communication between the master and chief engineer meant the bridge team were not fully aware of the problem with the main engine, nor its implications in respect of vessel manoeuvrability.

The main engine defect was not accounted for during the bridge team’s preparation for departure, and therefore the harbour pilot was also unaware of the defect.

The main engine fault was very likely due to the effect of low-sulphur fuel on the injection control unit.
What we can learn

The role that bridge resource management and engine room resource management play in respect of the safety of a vessel cannot be overstated. Good communication between departments is a core principle that may, had it been implemented on this occasion, have caused the master to reconsider the planned departure time.