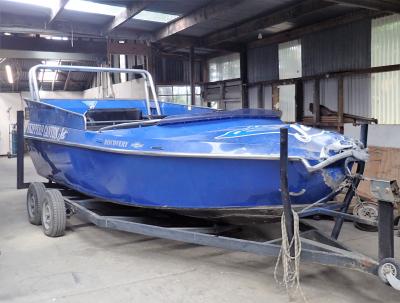 The boat was on its return leg when the driver was required to negotiate a series of bends in a section of the river about 10 metres wide. Approaching a left-hand bend, the driver tried to turn the wheel over to the left but it would not move. The driver then tried to reduce speed by operating the reverse bucket, which also wouldn’t move.

As a result the jet boat continued on its heading across to the opposite side of the river where it made contact with a rock face. The speed of impact was estimated to be between 20 and 30 kilometres per hour.

On impact, one passenger was thrown partially overboard and suffered a broken leg, while the remaining passengers suffered minor lacerations and bruising. A rescue helicopter was on the scene about 20 minutes later and evacuated the passengers.

Jet boating is a high-risk activity that leaves very little margin for error when navigating at high speeds in narrow channels and rivers. On this occasion the driver lost control of the jet boat due to a mechanical failure of the jet unit steering and propulsion system.

An inspection of the jet unit showed that three of the four stud-bolts securing the tailpipe assembly to the steering nozzle had suffered fatigue cracking, rendering the unit ineffective.

It is highly likely that the fatigue cracking was because the nuts on the stud-bolts were not tightened to the manufacturer’s recommended torque. As a result there was insufficient pre-tension in the stud-bolts.

The operator’s hazard identification system had not identified the failure of the steering and propulsion system as a hazard, focusing more on operating conditions and driver training.

An analysis of the evidence identified a number of key lessons:
- when a manufacturer provides detailed instructions and guidance on how to maintain its equipment, the onus is on the maintainer of the equipment to follow those instructions and ensure that it has an appropriate maintenance regime in place
- historically, investigations of jet boat accidents have mainly attributed the causes to operational conditions and driver training, but it is essential that operators pay equal attention to mechanical equipment and identify critical parts that, if defective, can have significant impacts on the safety of the operation.

In the interests of improving safety in the adventure tourism sector, the Transport Accident Investigation Commission has made a recommendation to the Director of Maritime New Zealand to address the requirement for operators to identify systems that are critical to the safe operation of a jet boat and ensure appropriate maintenance schedules are in place.
Related Safety Recommendation(s)
010/19
Location
Skippers Canyon, Queenstown (-44.889642,168.676063) [may be approximate]