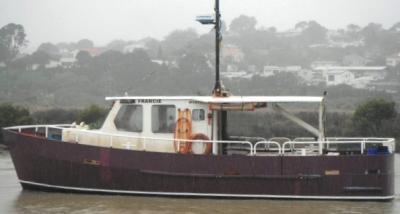 The Francie was struck from behind by a large breaking wave, then capsized and sank. Eight of the 11 people on board died. Only three people were wearing lifejackets when the Francie capsized.

The Commission also found that it is virtually certain that everyone on board would have had a better chance of survival if they had been wearing a lifejacket, and virtually certain that more people would have survived had those lifejackets been fitted with crotch straps. The Commission noted that people have a low appreciation of the importance of wearing lifejackets that are well fitted and of types appropriate to the locations and conditions where they will be used.

The Commission identified three key safety issues:
- Some people are using the accident and incident reporting process to raise safety concerns because there is currently no dedicated, formal process within Maritime New Zealand where members of the public and the maritime community can submit reports on safety and security concerns, including complaints and allegations of suspected breaches of maritime legislation
- maritime rules that specify the types of lifejacket to be carried on commercial vessels are based only on how far the vessels are permitted to travel from the coast. The rules do not consider environmental factors such as vessels operating out of bar harbours and on exposed coastlines, where higher-specification lifejackets would be more appropriate
- there are indications that people may not have a sufficient understanding of the design and capability of the various types of lifejacket available, or of the importance of wearing a lifejacket of the correct size and type for any situation where there is a risk of people ending up in the water.

The Commission made four recommendations to Maritime New Zealand to address these issues and noted the actions already being taken to address one of the safety issues.

Key lessons arising from this inquiry were:
- extreme caution must be exercised when crossing bars because sea conditions can change for the worse in a very short time. Waves can come from more than one direction and are usually larger and steeper than surrounding waters and often breaking
- wearing a lifejacket will significantly improve the chances of survival if a person unexpectedly finds themselves in the water
- when a person wearing a lifejacket unexpectedly finds themselves in the water, their chances of surviving are significantly improved if the lifejacket is of the appropriate type for the conditions and size of the person, and is fitted with a crotch strap to prevent their losing it when it rides up and over their head
- the Maritime New Zealand website has useful information about selecting a proper lifejacket that best suits a person’s maritime activity, and how and when it should be worn
- if a person has concerns about the safety of any maritime activity, they should not hesitate to report them to the appropriate maritime regulator. This could help prevent accidents and save lives in.
Related Safety Recommendation(s)
012/18
013/18
014/18
015/18
Location
entrance to Kaipara Harbour (-36.501388,174.100833) [may be approximate]