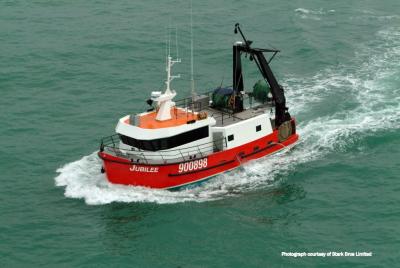 At 0419 a telephone call was made from the Jubilee's mobile phone to another company vessel fishing in the vicinity. The call was not answered.

At 0420 the skipper of the Jubilee made a radio 'mayday' call giving the Jubilee's location, saying that the vessel was taking on water and that they were abandoning the vessel into the liferaft. Akaroa Radio acknowledged the call and relayed it to all other vessels in the vicinity.

Search vessels arrived at the location at dawn and found only a liferaft that had self-deployed, an oil slick and some flotsam. Later that day the wreck of the Jubilee was found by sonar on the seabed at the location given in the mayday call.

During the following week divers identified the wreck of the Jubilee and recovered the bodies of all three crew members from the wheelhouse.

Further dives were made to gather evidence for the investigation. Attempts to salvage the vessel from the seabed were not successful.

The Transport Accident Investigation Commission (Commission) found it was likely that flooding of the Jubilee's fish hold was the main factor contributing to its sinking, or capsizing and sinking, and that it was about as likely as not that the cause of the fish hold flooding was water from a deck wash hose that had been left running through an open hatch.

The Commission also found that the absence of a bilge high-level alarm for the fish hold and the absence of an indicator in the wheelhouse alerting the crew when the bilge pump was running were missing checks in the system that would have alerted the crew and then about as likely as not prevented the sinking.

Safety issues identified included the following:
- the means of escape from the Jubilee's wheelhouse in the event of an emergency were not well designed and afforded the crew too few options for escaping in the event of capsize or sinking
- although not relevant to this accident, the means of escape from the Jubilee’s wheelhouse and accommodation space may not have met the intent of maritime rules for providing escape for crew in the event of fire
- there is a lack of advice and guidance in the Maritime Rules on what is an acceptable standard for surveyors to approve when the Maritime Rules defer to the surveyors' discretion.

The safety actions taken by the Jubilee's owner and two recommendations made to the Director of Maritime New Zealand should address these safety issues.

Key lessons arising from this inquiry were:
- good watchkeeping includes not only looking after the safe navigation of the vessel, but also being vigilant to the state of trim and stability of the vessel and any factors that could affect either
- Notwithstanding the minimum requirements set out in Maritime Rules, owners and designers of vessels should take a risk-based approach to designing and providing escape routes from all compartments for all foreseeable emergencies.
- crews need to assess and pre-plan escape routes from any part of their vessels for all foreseeable emergency situations.
Related Safety Recommendation(s)
014/17
016/17
Location
Canterbury Bight (-44.088300,172.266700) [may be approximate]