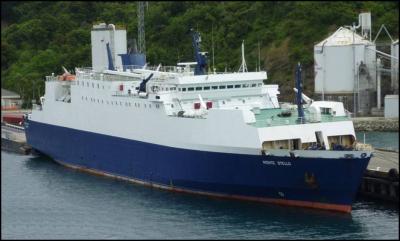 At about 0600 on 4 May 2011, the Monte Stello was making its entrance into Tory Channel via the eastern entrance. The bridge team comprised the master (acting as pilot), the third mate (acting as co-pilot), the helmsman, and the lookout.

While making the left-hand turn into Tory Channel, the rudder was inadvertently placed in the wrong direction, causing the ship to deviate from the planned track. The error was soon realised and corrective action taken, but not soon enough to prevent the ship glancing off a rock on the northern side of the channel.

The rock caused indenting of the hull plating but did not penetrate the hull. One of the vessel’s two propellers sustained damage when it also struck the rock. The ship was able to complete the voyage to Picton unaided. No-one was injured in the accident.

The Commission found that the error in rudder direction was not picked up in sufficient time to prevent the grounding because the procedures for checking and cross-checking every action during critical phases of navigation, known as bridge resource management, were not being strictly followed by the bridge team.

The Commission also found that the standards of navigation and bridge resource management required by KiwiRail's safety management system were not being achieved by the bridge team that was on board the Monte Stello when the accident occurred.

The Commission made one recommendation to KiwiRail to address this safety issue.

A key lesson arising from the inquiry was that bridge resource management is not something that can be trained for and then left to chance. It must be a standard operating procedure fully understood and followed by all crews, all of the time. It only takes one bridge team failure to result in a serious accident.
Related Safety Recommendation(s)
010/16
Location
Tory Channel