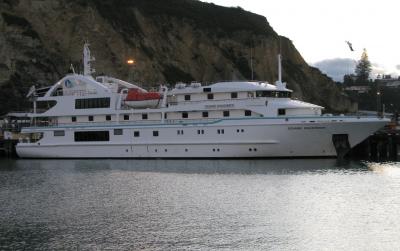 The Oceanic Discoverer. Credit TAIC.
Passenger vessel Oceanic Discoverer, fatal injury, Port of Napier19 February 2009
Status
Closed
Occurrence Date
19 Feb 2009
Report Publication Date
22 Dec 2011
Jurisdiction
NZ
Legacy Inquiry Number
09-202
General
On 19 February 2009, the Australian-registered passenger ship Oceanic Discoverer was at its berth in the New Zealand port of Napier. The crew were conducting a fire and emergency drill, of which part was to close and test the hydraulically closed watertight doors.
The master closed the watertight doors remotely from the bridge. Some minutes later the chief engineer opened the watertight door to the engine room, but for some reason he became trapped by the door as he passed through the doorway. The chief engineer was trapped in the door for more than 8 minutes before he was found and the crew were able to free him. He was resuscitated but never regained consciousness and later died in hospital.
The watertight doors were normally set in the local-control mode, which meant that they would not automatically close after someone had walked through. At the time of the accident the doors were in the remote-close mode, which meant they would automatically close when the user released the opening handle. The crew on board the Oceanic Discoverer routinely passed through the watertight doors without fully opening them when the doors were in the local-control mode, a practice that was probably followed when the doors were in the remote-close mode as well.
The chief engineer possibly tried to pass through the door before it was fully open, and for some reason it began closing and trapped him.
The door had been set to close at twice the allowable closing speed, which would have likely contributed to the accident. It is possible that the audible alarm warning that the door was closing, was not working at the time. A failure of the audible alarm may have contributed to the accident.
The watertight door did not comply with the minimum requirements of the International Convention for the Safety of Life at Sea, 1974, as amended (SOLAS). The safety management system on board did not ensure that the watertight doors were maintained in a condition consistent with the regulations or good marine engineering standards.
The procedures for operating the watertight doors were the same for both modes of operation, even though the remote-close mode carried a much greater risk. This report discusses the inconsistency in advice given by the International Maritime Organization (IMO) and various maritime Administrations, and discusses the efficacy of trying to address a serious maritime safety issue with one recommended procedure when the safety issue spans a diverse number of systems and problems.
Recommendations were made to the Director of Maritime New Zealand to address with the IMO the issue of watertight door safety, and the Chief Executive Officer of the Australian Maritime Safety Authority (AMSA) to address issues with the safety management system on board the Oceanic Discoverer.
A recommendation was also made to the manufacturer of the watertight doors to address possible design issues with the watertight doors. This recommendation was copied to the International Association of Classification Societies (IACS) so that its member surveyors could be alerted to the safety issues identified in this report and begin monitoring for these when conducting watertight door surveys and tests.

Safety lessons
These are the generic lessons arising from the inquiry:
- always fully open a watertight door before passing through the doorway when the door is in the remote-close mode
- the faster the door closes, the greater the risk. Under no circumstances should watertight doors be set to close faster than the maximum allowable speed
- ship operators should adopt specific procedures for operating watertight doors in both local-control and remote-close modes. The procedures should be compatible with the doors’ purpose and design, and the frequency with which they are used
- legislation governing the design and use of watertight doors should be flexible enough to achieve appropriate procedures for the use of any watertight door in any mode
- poorly maintained watertight doors are dangerous. Shipboard planned maintenance systems should be designed and followed to ensure that watertight doors are maintained in accordance with manufacturers’ instructions, and in accordance with good standard marine engineering practice.
Related Safety Recommendation(s)
025/11
026/11
027/11
028/11
Location
Port of Napier (-39.476469,176.919837) [may be approximate]