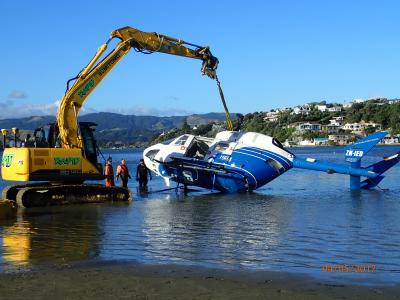 The helicopter being lifted out of the harbour
MBB BK117 A-3 helicopter, ZK-IED, Loss of control, Porirua Harbour, 2 May 2017
Status
Closed
Occurrence Date
2 May 2017
Report Publication Date
25 Jun 2020
Jurisdiction
NZ
On Tuesday 2 May 2017, a BK117 A-3 helicopter was being used to transport three 11-metre long hardwood power poles from a staging area on one side of the Pāuatahanui Arm of Porirua Harbour and place them in holes that had been prepared near the shoreline on the other side of the Arm.

The pilot escaped from the partially submerged helicopter with minor injuries. The helicopter was substantially damaged.

The Transport Accident Investigation Commission (Commission) found no mechanical issues with the helicopter that would have likely contributed to the accident.

The Commission found that control of the helicopter was lost likely due to a phenomenon known as unanticipated right yaw. The Commission also found that operational pressure likely combined with other stressors to increase the risk of the pilot becoming distracted.

The Commission found several significant anomalies in the maintenance records for the helicopter, which had been left unresolved at the time the Civil Aviation Authority issued it with a certificate of airworthiness.

The helicopter had not undergone all the inspections and verification-of-maintenance tasks required before the Civil Aviation Authority issued the certificate of airworthiness.

During the inquiry it was discovered that other aircraft owned and operated by the same company that imported the helicopter into New Zealand also had significant anomalies in their maintenance records.

In its interim report on the accident, the Commission raised with the Civil Aviation Authority that the number and nature of maintenance anomalies involving aircraft operated by Helipro were a safety issue. The concern was that there could be historical or latent maintenance issues with some of Helipro’s other aircraft that had been on-sold and were then being operated on the New Zealand register by various other companies.

The Civil Aviation Authority immediately issued a Continuing Airworthiness Notice to address that safety issue. It was subsequently withdrawn after no reports were received.

In this report the Commission has identified a further safety issue, whereby the Civil Aviation Authority’s process for entering second-hand imported aircraft into the New Zealand regulatory system was not clearly defined; was not clearly understood by some staff; and did not have the checks in place to ensure it was followed.

The Civil Aviation Authority subsequently arranged an independent review of the process for issuing a certificate of airworthiness, including the conformity inspection process for second-hand aircraft. However, the Commission believes further action needs to be taken. As a result, the Commission has made one recommendation to the Civil Aviation Authority to address that issue.

Key lessons arising from the inquiry include:
- pilots can experience distraction during all phases of flight. Pilots must remain vigilant to ensure that their performance is not degraded by distraction when attending to various tasks necessary to the safe operation of an aircraft
- unanticipated yaw is a flight characteristic to which all types of single-rotor helicopter can be susceptible. Pilots need to remain cognisant of the conditions in which the phenomenon is likely to occur and the actions required for recovery
- the disclosure of medical conditions and prescribed medication to the Civil Aviation Authority ensures that their aeromedical significance can be determined. It does not automatically preclude a pilot from carrying out their duties, but does ensure a pilot can operate an aircraft safely
- it is essential that all maintenance and inspection tasks are conducted and properly recorded in accordance with applicable rules.
Related Safety Recommendation(s)
005/20
Location
Pauatahanui, Porirua Harbour (-41.085555,174.886311) [may be approximate]