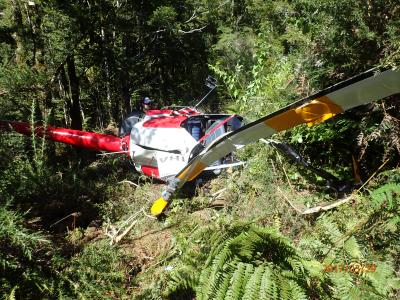 The crashed helicopter at the site
Robinson Helicopter Company R22, ZK-IHA, Impact with terrain, Near Reefton, 27 March 2017
Status
Closed
Occurrence Date
27 Mar 2017
Report Publication Date
28 May 2020
Jurisdiction
NZ
On 27 March 2017, a two-seat Robinson Helicopter Company R22 helicopter, registration ZK-IHA, was carrying a slung load as part of a local aerial hunting operation near Reefton. Shortly after take-off, while the helicopter was climbing over densely forested terrain, the helicopter and load struck the tree canopy and then the terrain. The helicopter was destroyed, and the pilot, who was the sole person on board, was fatally injured.

The Transport Accident Investigation Commission (Commission) found that the helicopter likely experienced a low rotor-revolutions-per-minute event during the accident sequence. However, it could not be determined if this event occurred before the initial impact with the tree canopy or during the subsequent descent. The Commission was unable to determine conclusively why the helicopter struck the tree canopy and subsequently the terrain. However, it was likely due to either:
- the engine not delivering the demanded power, or
- the pilot inadvertently not maintaining a suitable clearance above the tree canopy.

The Commission found that the environmental conditions at the time of the accident had the potential to affect the safe conduct of the flight.

The Commission found that the engine was in a condition that would have likely prevented it being capable of producing the maximum specified power.

The Commission found that the pilot lifted off and flew the helicopter over densely forested terrain, when other take-off directions were available that offered less risk in the event of an aircraft emergency.

The Commission found that the pilot had conducted a commercial flight, which was beyond the privileges of the pilot’s private pilot licence.

The Commission found that the helicopter had not been maintained in accordance with the manufacturer’s instructions and the Civil Aviation Rules, and the engine showed signs of wear that were inconsistent with the hours recorded in its logbook.

The Civil Aviation Authority’s regulatory and surveillance controls for the non-commercial aviation sector were broadly aligned with international standards and recommendations for this sector. Therefore, the Commission has not made any new recommendations.

The key lessons identified from the inquiry into this occurrence are:
- all aviation participants have a responsibility to ensure they comply with the Civil Aviation Rules, which are in place to ensure the safe conduct of flight
- aviation participants who have concerns about other participants should raise these concerns through the Aviation Related Concerns system, as they have the potential to prevent accidents and incidents occurring
- the circumstances of this accident show the importance of the regulator continuing to monitor sectors of the industry it deems to have a low consequence of failure.
Location
Reefton (-42.038700,171.939100) [may be approximate]