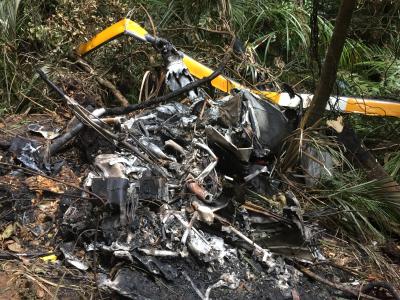 Part of the molten wreckage of the helicopter at the site
Collision with terrain, Robinson R44, ZK-HTH, Glenbervie Forest, Northland, 31 October 2016
Status
Closed
Occurrence Date
31 Oct 2016
Report Publication Date
28 Mar 2019
Jurisdiction
NZ
On Monday 31 October 2016, ZK-HTH, a Robinson R44 helicopter, was being used to conduct aerial spraying of forestry blocks in Glenbervie Forest, north of Whāngārei. The pilot and a forestry contractor were using the helicopter to conduct a pre-spraying survey to ensure that the boundaries of the target blocks were correctly identified, and to check for any hazards and obstacles.

The helicopter was flying away from the blocks being surveyed and had just crossed a ridge when it crashed into dense bush and caught fire. The helicopter was destroyed and the two occupants were fatally injured.

The Transport Accident Investigation Commission made the following findings:
- The damage to the helicopter sustained in the accident sequence and subsequent fire, and the lack of any other incontrovertible evidence, meant that the cause or causes of the accident could not be determined.
- A bolt that attaches the pitch link to the pitch horn on one of the main rotors was found to be missing. It is virtually certain that the missing bolt came out of position during the impact sequence, meaning it did not contribute to the accident.
- It was not possible to determine why the cyclic extension for the left seat was installed and if it was being used at the time of the accident or at any time during the flight.

The Transport Accident Investigation Commission has previously made a recommendation that on-board recorders be fitted to certain classes of helicopter to aid accident investigation. If such a recorder had been fitted and recovered, it would very likely have helped to identify the cause or causes of this accident. No new recommendation was made.
Location
Glenbervie Forest, Northland (-35.650200,174.335800) [may be approximate]