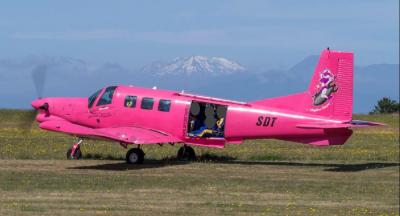 The engine failure originated from a fatigue crack in a compressor turbine blade. The failed blade was one of a set of overhauled blades that had been installed 1,127 flight hours before the accident flight. The inspection interval for overhauled blades was 3,000 hours.

The turbine section of the engine had been inspected during scheduled maintenance 87 flight hours before the accident. The recommended procedure was to inspect both sides of the compressor turbine blades for any cracks, but it was very likely that only one side was inspected. It was not determined whether the fatigue crack existed and might have been visible at the time of that inspection.

It was fortuitous that none of the parachutists or the pilot landed in the lake. Although each tandem rider was wearing a lifejacket, the tandem masters would have had to rely on the buoyancy of their un-deployed main parachutes to stay afloat. The pilot had no flotation device.

The following safety issues were identified during the inquiry:
- the measurement specifications for overhauled compressor turbine blades that had been through a strip and recoat repair process were not exactly the same as those for new blades. Blades that had been through that repair process, without verification of critical dimensions, might fail before the next 3,000-hour inspection
- when aircraft maintenance staff do not refer to the current Instructions for Continuing Airworthiness for a task, perhaps because they are very familiar with the basic task and do not know that the task documentation has changed, safety might be compromised
- parachute drop pilots were not required to wear lifejackets or flotation devices if their flights were expected to remain within gliding distance of land. That scenario downplayed the possibility of a pilot having to ditch an aeroplane or having to use the emergency parachute when over or near water.

The failed blade and two others sampled from the set were undersize in some dimensions, compared with new blades. The size discrepancy likely contributed to the fatigue failure. As a result of this occurrence, Pratt & Whitney Canada amended the measurement specifications for the acceptance of blades that had been through a strip and recoat repair process to better reflect the criteria for new blades in the trailing edge area.

Pratt & Whitney Canada and Pacific Aerospace also reviewed the contemporary operation of the 750XL aeroplane and PT6A-34 engine in the skydiving role against their original design assumptions. They found that, on average, operators were using higher engine power settings more frequently and for longer periods than had been assumed. As a result of these findings, Pratt & Whitney Canada will introduce an additional scheduled inspection for PT6A-34 engines that are used in single-engine installations.

The pilot did not follow the operator's recommended procedure for baling out, which put himself and others at risk of serious injury. To reduce the likelihood of this hazard, the operator improved the emergency procedures training given to its pilots.

The Transport Accident Investigation Commission made a recommendation to Skydive Taupo to investigate options for equipping its parachute drop pilots with effective flotation devices.

The key lessons arising from this inquiry were as follows:
- operators and pilots engaged in skydiving operations should assess carefully the risk of having to use an emergency parachute or landing in water, and ensure that they have the appropriate training and equipment. Pilots must have a thorough understanding of the care and use of emergency parachutes, as their lives depend on them
- aircraft maintenance engineers should not commence any task related to airworthiness without ensuring that they have the current procedure and information necessary for the task
- operators and maintenance providers should ensure that they comply fully with any registration or other requirement of approved supplemental type certificates.
Related Safety Recommendation(s)
018/17
Location
Lake Taupo (-38.801200,176.066000) [may be approximate]