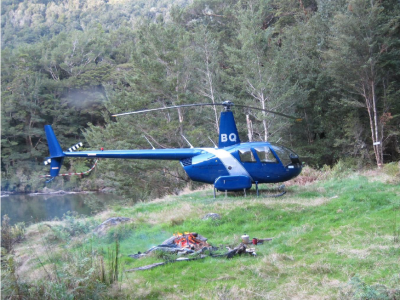 ZK-HBQ R44 II. Courtesy of Helicopter Charter Karamea.
Robinson R44 II, ZK-HBQ, mast-bump and in-flight break-up, Kahurangi National Park, 7 October 2014
Status
Closed
Occurrence Date
7 Oct 2014
Report Publication Date
29 Mar 2017
Jurisdiction
NZ
At about 0808 on 7 October 2014, a Robinson R44 helicopter (the helicopter) crashed into steep bush to the northeast of Mt Arthur, in the Kahurangi National Park. The helicopter was being flown from Karamea to Nelson for scheduled maintenance, through an area of forecast high winds and turbulence, at the time of the accident.

Mast-bumping can occur when a helicopter enters a low-gravity (low-G) condition (less than 1G to weightless/zero G), which can be caused by turbulence or induced by flight control inputs.

In-flight break-ups can also be caused by low main rotor revolutions per minute (RPM). However, the Transport Accident Investigation Commission (the Commission) determined that it was very unlikely that low main rotor RPM was a factor in this accident.

The Commission determined that it was very likely that the helicopter entered a low-G condition after crossing the Tasman Ranges downwind from Mt Arthur. Turbulence created by a strong southwest wind likely included severe downdraughts that prolonged the low-G condition, which likely initiated the mast-bumping.

The Commission could not rule out a flight control input as having contributed to the in-flight break-up.

The Commission made the following additional findings:
- had a previous limitation on maximum wind speeds for inexperienced Robinson R44 pilots remained in place, as per that for Robinson R22 pilots, the pilot would have been prohibited from flying at the time of the accident, due to the forecast strong winds and turbulence
- all Robinson helicopter models are susceptible to low-G mast-bumping, and any preventive measures should apply to all of them
- due to their unique main rotor design, during a prolonged or severe low-G condition Robinson helicopters can roll rapidly to the right, and likely break up before a pilot can recover
- a pilot's instinctive reaction to an unexpected right roll, or the unintentional movement of a pilot's limbs or upper body during severe turbulence or low-G, could lead to mast-bumping
- although not an intuitive reaction to a sudden right roll, the aft cyclic technique is the only approved recovery technique, and should be used as soon as low-G is felt to 'reload' the main rotor disc and help reduce any right roll.

The Commission made the following recommendation to the Administrator of the Federal Aviation Administration:
- extend the limitations and requirements of AD 95-26-04 that currently apply to the R22 in regard to operating in strong winds and turbulence, to the R44 and R66 models; and
- extend those limitations and requirements to all R22, R44 and R66 pilots regardless of their experience levels.

The Commission made the following recommendation to the Director of Civil Aviation:
- until the FAA [Federal Aviation Administration] actions the above recommendation, he extend the limitations and requirements of AD 95-26-04 to R44 and R66 helicopters in New Zealand, and make them applicable to all pilots of Robinson helicopters in New Zealand regardless of their experience.

The key lessons identified from the inquiry into this occurrence are:
- pilots of two-bladed, semi-rigid rotor helicopters must be acutely aware of the risks and effects of encountering moderate or greater turbulence in strong winds, especially in the lee of high terrain
- if moderate or greater turbulence is encountered while flying a two-bladed, semi-rigid rotor helicopter, the pilot should consider landing and waiting for the conditions to improve
- pilots of two-bladed, semi-rigid rotor helicopters should be aware of the helicopters' increased susceptibility to low-G conditions when lightly loaded, and the adverse effects that high power and a high tail rotor have on the rate of roll
- pilots of Robinson helicopters should use the manufacturer’s approved low-G recovery technique as soon as low-G conditions are felt.
Related Safety Recommendation(s)
007/17
008/17
Location
Kahurangi National Park (-41.204700,172.736500) [may be approximate]