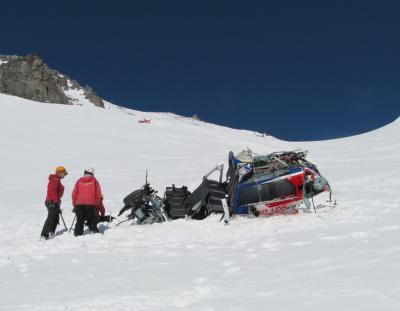 The Transport Accident Investigation Commission (Commission) found that the total weight of the helicopter was about 30 kilograms over the maximum permissible weight, and the centre of gravity was about 3.0 centimetres ahead of the forward limit. The helicopter was operating at or close to the limit of its performance capability to maintain a hover outside of ‘ground effect’ at that weight and at the temperature and altitude of the landing site. This was a likely factor in the pilot not achieving a safe landing.

The Commission was unable to make a conclusive finding on whether the helicopter was affected by a phenomenon known as ‘vortex ring state’.

The Commission found no mechanical reason for the accident. The engine was delivering high power and the helicopter was controllable. The pilot was experienced and had received training in mountain flying and heli-ski operations.

Two safety issues were identified during this inquiry. The first was that the operator’s standard operating procedures did not require its pilots to routinely calculate the performance capabilities of their helicopters for the intended flights.

The second was that there was a risk of not knowing an aircraft’s capability when using standard passenger weights, and therefore of pilots operating close to the limits of their aircraft’s performance.

This accident and others are suggestive of a third safety issue, which is some New Zealand helicopter pilots may have a culture of operating their aircraft beyond the manufacturers’ published and placarded limits, with the possibility that such a culture has become normalised.

The importance of pilots knowing the performance capabilities of their aircraft and of observing published limitations is well known. For example, the Civil Aviation Authority has commented:
Take-off, landing and hovering are all potentially risky phases of helicopter flight. The more that we can do as pilots to minimise these risks – especially when operating at high gross weights, from challenging sites, with high density altitudes – the safer we will be.
Most performance-related accidents can be prevented, provided that the pilot maintains a good awareness of the surrounding conditions, knows the performance limitations of the helicopter, always does a power check before committing to a marginal situation, and is disciplined enough to “give it away early” if the odds are stacking up against getting the job done safely. (CAA, 2012, p. 33)

A number of safety actions were taken in respect of these safety issues.

The Commission made three recommendations to the Director of Civil Aviation to address the safety issues.

The key lessons arising from this inquiry are:
● flying in mountainous terrain places additional demands on a pilot’s skills and an aircraft’s performance. Both could be at or near the limits of their capabilities. Operators need to ensure that their safety management systems address the additional risks associated with flying in such an environment
● the use of ‘standard’ or ‘assessed’ passenger weights is not a licence to exceed an aircraft’s permissible weight and balance parameters. Any aircraft being operated outside the permissible range will have a higher risk of having an accident, particularly when being operated near the margins of aircraft performance capability
● it is important for operators to keep comprehensive, formal records of all pilot training. Historical training records provide the basis for ongoing performance monitoring and professional development, particularly given natural attrition as safety and training managers move through the industry
● seatbelts are only effective in preventing or minimising injury if they are fastened and properly adjusted. Aircraft operators must ensure that passengers and crew fasten their seatbelts and adjust them to fit tightly across their hips
● vortex ring state is a known hazard for helicopters. To avoid the hazard, pilots must:
a. remain alert to the conditions conducive to the formation of vortex ring state
b. closely monitor the airspeed and rate of descent during the final approach
c. initiate recovery action at the first indication that they may be approaching vortex ring state.
Related Safety Recommendation(s)
005/17
006/17
032/17
Location
Mount Alta, 20 km north-west of Wanaka (-44.503300,168.970000) [may be approximate]