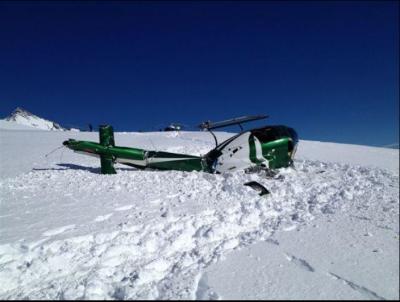 The accident scene, with ZK-IMJ in the foreground and ZK-HAE in the background
Aerospatiale AS350B2 'Squirrel', ZK-IMJ, collision with parked helicopter, near Mount Tyndall, Otago, 28 October 2013
Status
Closed
Occurrence Date
28 Oct 2013
Report Publication Date
27 Jul 2017
Jurisdiction
NZ
On 28 October 2013 a party of 12 tourists was taken in two AS350 Squirrel helicopters operated by The Helicopter Line from Queenstown aerodrome to a snowfield approximately two kilometres southeast of Mount Tyndall in Otago province. The first helicopter landed. The second helicopter was about to land but the pilot carried out a go-around. During the go-around the helicopter came close to colliding with the main rotors of the parked helicopter.

The helicopter was uncontrollable without the tail rotor assembly. It spun rapidly a number of times before climbing slightly then crashing about 70 metres in front of the parked helicopter. The pilot received a serious injury and all of his passengers received minor injuries.

The Transport Accident Investigation Commission (Commission) found that blowing snow very likely contributed to the near collision during the go-around, but it was unable to determine the cause of the collision. The Commission made findings that excluded technical, helicopter performance and other environmental factors as causes of the collision. The possibility that the pilot misjudged his approach, causing the accident, could not be excluded. There was no evidence to suggest that the pilot had a medical condition that contributed to the accident, but that possibility could not be excluded.

The Commission identified the following safety issues during the inquiry:
- when pilots do not inform their flight-following organisations of changes to their routes or destinations, any search and rescue action that is required could be delayed or misdirected
- the widespread practice of allowing passengers to leave and return to a helicopter parked on snow while the rotors are turning is hazardous.

A recommendation was made to the Director of Civil Aviation that he ensure that helicopter operators who conduct snow landings address in their safety management systems the hazard of passenger disembarkation and embarkation during snow landings while the rotors are turning.

The key lessons identified during the inquiry into this occurrence were:
- transport operators should keep formal records of concerns about operational staff and how they are dealt with. Record keeping is consistent with the safety management system goal of improving system quality
- pilots should ensure that they inform their flight-following organisations of any changes to their operating areas or destinations.
Related Safety Recommendation(s)
009/17
Location
Tyndall Glaciers (-44.551700,168.631700) [may be approximate]