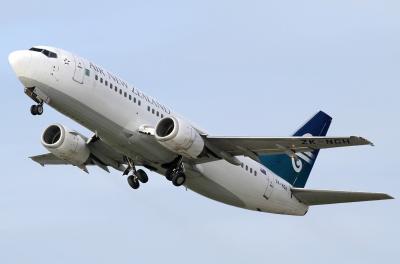 Boeing 737 - ZK-NGH. Courtesy of Jonathan Rankin.
Descent below instrument approach minima, Christchurch International Airport, 29 October 2011
Status
Closed
Occurrence Date
29 Oct 2011
Report Publication Date
26 Jun 2014
Jurisdiction
NZ
On Saturday 29 October 2011, an Air New Zealand Boeing 737 (the aeroplane) was on a flight from Auckland to Christchurch with six crew and 128 passengers on board. The captain was the "pilot flying" and the first officer was the "pilot monitoring". A check captain was also on the flight deck. He was conducting an annual route check on the captain.

The aeroplane made a standard instrument approach to the runway from the south. The procedure allowed the aeroplane to descend to 200 feet above the ground, which was called the decision height. At this point the captain had to decide if he had the required visual reference to continue the approach (for example, he could see the runway approach lights). If he did have visual reference, he was permitted to continue descending to land. If he did not have the required visual reference, it was mandatory to initiate a "missed approach" and "go around" for another attempt.

The aeroplane was still in cloud/fog when it reached a height of 200 feet, but the captain did not initiate a missed approach. Both the first officer and the check captain were about to intervene when the runway approach lights became visible at a height of about 100 feet. The captain then landed the aeroplane.

A pilot not initiating a missed approach when they do not have the required visual reference at decision height is a safety issue. Before reaching the decision height, the captain had failed to respond to two other procedural check calls, and these two failures went unchallenged by the first officer, which is another safety issue.

The Transport Accident Investigation Commission (Commission) determined that the captain did not comply fully with the procedures and perform the mandatory missed approach because he was under stress brought on by a combination of factors comprising:
- the Canterbury earthquakes and their aftershocks
- personal health issues
- anxiety associated with the route check flight.

The Commission also determined that the captain's failure to respond on two occasions should have been picked up and challenged by the first officer before the aeroplane reached the decision height.

The report discusses the role of a check captain and how this could affect crew interaction on the flight deck.

Air New Zealand (the operator) has used this incident to reinforce to its pilots the need to follow standard operating procedures and initiated a range of other safety actions. A recommendation was made to the Director of the Civil Aviation to highlight to other operators the need to follow procedures and to appropriately manage those situations where the normal crew dynamics may be disrupted by the inclusion of additional personnel, for example during a check flight.

Some key lessons arising from this investigation were:
- good crew communication and interaction and sharing a clear understanding of the intentions for each stage of the flight are essential elements of flight safety
- adherence to standard operating procedures by all crew members is essential for ensuring safe aircraft operations.
Related Safety Recommendation(s)
015/14
Location
Christchurch Airport (-43.483300,172.533300) [may be approximate]