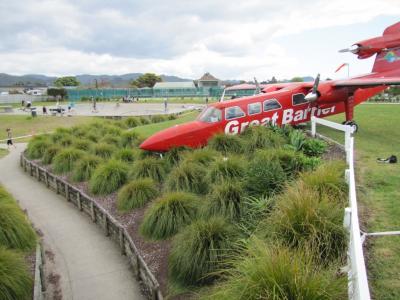 The Transport Accident Investigation Commission (Commission) found that the main reason for the aeroplane not getting airborne was that its centre of gravity (balance) was significantly outside the permissible limits. The pilot's take-off technique and, possibly, increased resistance from the wheels of the heavy aeroplane on the runway surface were other factors that contributed to the aeroplane over-running the end of the runway.

The Commission also found that the required margin for a safe take-off was not met because the aeroplane was too heavy for the available runway length. This was a reason for the aeroplane not stopping before the runway end after the pilot had rejected the take-off.
The Commission identified the following safety issues:
- the standard of pilot training and supervision of operations at Great Barrier Airlines was below that required
- the Civil Aviation Authority of New Zealand (CAA) had had recurring concerns for the management and standard of operations at Great Barrier Airlines during the 3 years prior to this incident, but the actions taken to address those concerns had been largely ineffective
- the Thames-Coromandel District Council (the council) had not evaluated the effects of a subsurface runway irrigation system on the maximum equivalent single wheel load (ESWL) for the Pauanui Beach runway.

The Commission has made recommendations to the Director of Civil Aviation (the Director) and the Chief Executive of the council to address these safety issues.

Key lessons identified during this inquiry were:
- pilots must know the weight and balance of their aircraft before every flight and ensure that both remain within permissible limits. Failure to do so can have serious consequences for flight safety
- when calculating the weight and balance of their aircraft, pilots should use a standard weight for passengers only if it is truly representative of the actual passenger weights for the flights
- it takes more than just good written policies and procedures to achieve an acceptable level of flight safety. Managers need to lead by example and ensure that pilots actually follow the procedures.
Related Safety Recommendation(s)
001/14
002/14
Location
Pauanui Aerodrome, Coromandel Peninsula (-37.021700,175.858300) [may be approximate]