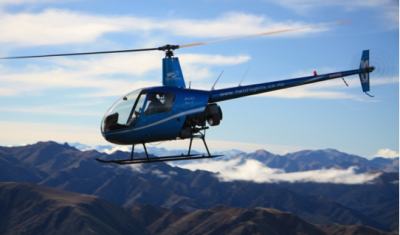 The weather for the trip was fine with a southeast wind blowing across the Southern Alps to the west. The wind was reported to be stronger than was indicated in the various aeronautical weather forecasts, at approximately 40 kilometres per hour (km/h), with gusts of up to 60 or 70 km/h over the mountain passes. The wind was causing turbulence on the leeward side of the mountains and passes, such as Matukituki Saddle.

The outward leg of the flight followed Lake Wanaka then travelled over Haast Pass to Neils Beach near the township of Haast. There the pilots refuelled the helicopter for the return leg, which was back to Wanaka via Matukituki Saddle near Mount Aspiring.

The wreckage revealed that the helicopter had broken up in flight. The Transport Accident Investigation Commission (Commission) determined that the helicopter had been operating in a high-risk situation at the time due to a combination of factors - at an altitude of about 5500 feet, close to its maximum permissible weight and entering an area of moderate to extreme turbulence.

The Commission determined that the in-flight break-up was caused by the main rotor blades deviating from their normal operating plane of rotation and striking the tail boom, causing a separation of the tail rotor assembly. This was likely to have been caused by one or a combination of the following conditions:
- severe or extreme turbulence buffeting the helicopter
- the main rotor speed being allowed to drop below its lower limit
- the pilots making large and abrupt movements of the controls.

Safety issues identified include:
- a lack of knowledge within the industry has led to the possibility that the instructor was not fully aware of the risks involved in flying the Robinson R22 helicopter near maximum weight at high altitude, and in moderate to severe turbulence
- the format of the Robinson R22 helicopter flight manual and the terminology it uses do not draw appropriate attention to safety-critical instructions and conditions that could result in serious injury or death
- the rate of R22 in-flight break-up accidents in New Zealand has not been significantly reduced by the New Zealand version of the Federal Aviation Administration (FAA) hazard mitigation measures intended to prevent such accidents.

A further but non-contributing safety issue was the crash survivability of emergency locator transmitters (ELTs), which automatically alert rescue co-ordination centres when an aircraft accident or incident has occurred.

The Commission made 2 recommendations to the Director of Civil Aviation to address the pilot and instructor ratings on Robinson helicopters, and a further 2 recommendations to support international efforts to improve the crashworthiness of ELTs and promote the use of alternative aircraft tracking systems to aid search and rescue efforts.

The key lessons from this investigation were:
- any aviation regulatory system must ensure that recommended and permissible maximum operating parameters for an aircraft type are clearly and consistently articulated to pilots, regardless of the country in which the aircraft is operated
- pilots must be fully aware of the operating limitations of aircraft they fly, and must always stay within those limitations.
Related Safety Recommendation(s)
005/14
006/14
003/14
004/14
Location
Arawhata Valley, Mount Aspiring National Park (-44.407300,168.627700) [may be approximate]