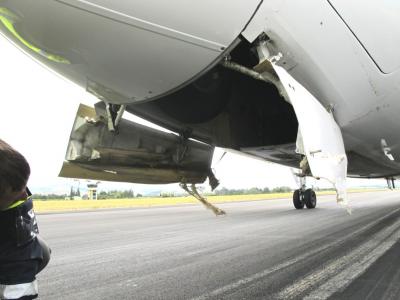 The nosewheel steering hydraulic power came from the extend side of the landing gear hydraulic system. On the approach to Wellington, none of the landing gear extended when it was selected down. The pilots carried out a go-around to give them time to perform the relevant procedures provided in a Quick Reference Handbook (QRH). The Q300 was fitted with an alternative system for lowering the landing gear when the normal system failed. The "Alternate Gear Extension" procedure succeeded in getting the main landing gear to extend, but not the nose landing gear.2 That remained locked in its retracted position.

The operator's pilots were not made aware through their training of how hard one had to pull the handle to release the nose landing gear uplock. A much lesser pull was required when practising the procedure in the operator's flight simulator and the Alternate Gear Extension procedure did not, at the time, give any guidance as to the force required.

Air Nelson modified its flight simulator so that the forces were more typical of those found on the actual aeroplane, and provided its pilots with more technical information on the Alternate Gear Extension procedure. The aeroplane manufacturer provided all operators of the Q300 with a more comprehensive description of the Alternate Gear Extension procedure and provided options for pilots to consider should the procedure be unsuccessful.

A recommendation was made to the Director of Civil Aviation that he liaise with Transport Canada to make other National Aviation Authorities aware of this incident and of the desirability of flight simulators closely representing the actual forces required for an alternate landing gear extension.

Although not contributory to the accident, the report discusses the design of checklists and how they can lead to pilots making errors or missing important items during times of high workload. The Transport Accident Investigation Commission (the Commission) had commented on this issue in a previous inquiry. A recommendation was made to the Director of Civil Aviation regarding the format of QRHs.

The Commission made findings about the cause of the nosewheel steering and landing gear extension failures, about crew training in alternative procedures, and the importance of having well designed QRHs.

The Commission also identified the following key lessons:
- in their simulator training pilots should be taught how to perform emergency and non-normal procedures as robustly and rigorously as if the procedures were being performed on the actual aircraft
- pilots should be informed of flight simulator characteristics that differ from those in the aircraft to ensure that pilots are not misled during actual flight operations
- QRHs should be designed to minimise the potential for error as they are used by pilots during times of high workload and, potentially, high stress when dealing with emergencies.
Related Safety Recommendation(s)
036/12
037/12
Location
Blenheim (-41.518300,173.870000) [may be approximate]