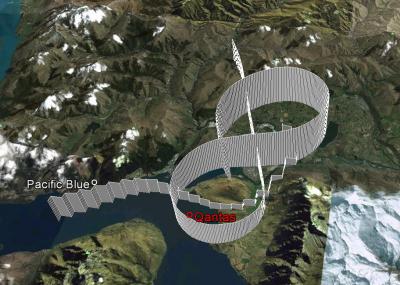 Flight paths of both aeroplanes. Courtesy of the Australian Transport Safety Bureau.
Boeing 737-800, ZK-PBF and Boeing 737-800, VH-VXU, airspace incident, near Queenstown Aerodrome, 20 June 2010
Status
Closed
Occurrence Date
20 Jun 2010
Report Publication Date
29 Mar 2012
Jurisdiction
NZ
Legacy Inquiry Number
10-007
On 20 June 2010, a Boeing 737-800 aeroplane operated by Pacific Blue was being flown on a conventional instrument approach to Queenstown Aerodrome. When making an instrument approach, pilots must see the runway before they may descend below the minimum descent altitude and they must maintain visual reference with the runway until landing. If visual reference is lost, they must execute a missed approach procedure.

Because of the mountainous terrain, the minimum descent altitude for the conventional instrument approach to Queenstown is about 3500 feet above the aerodrome. The terrain prevents pilots descending straight ahead from the minimum altitude and landing. Instead, they must circle while descending until their aircraft is in a position to land.

When the Pacific Blue aeroplane arrived at the minimum descent altitude, the pilots could see lower cloud in the Queenstown basin, but the runway was clear. However, because low cloud patches would have obstructed their manoeuvring to the final approach for runway 23, the pilots reported to air traffic control (ATC) that they would attempt to land on the reciprocal runway 05.
Meanwhile the controller had cleared another Boeing 737-800 aeroplane operated by Qantas to begin an approach behind Pacific Blue. The Qantas pilots were flying a ‘required navigation performance’ approach based on global navigation satellite system technology, which allowed them to descend to a much lower minimum altitude. At the time, Pacific Blue had not applied to the Civil Aviation Authority (CAA) for authorisation to use that technology. The controller cleared Qantas for its approach based on an expectation that the Pacific Blue pilots, having commenced circling, would land or, if unable to land, would remain in the aerodrome visual circuit.

Lower cloud was likely to have prevented the Pacific Blue pilots maintaining visual contact with runway 05, so they discontinued the circling and climbed directly to intercept the prescribed missed approach track for the instrument procedure they had flown. They had not planned to enter or remain in the visual circuit as the controller had expected and, because of their position when they commenced the climb, probably could not have done so because of their proximity to terrain.

The controller then instructed Qantas to conduct the missed approach for its procedure and at the maximum rate of climb, in order to maintain separation from the Pacific Blue aeroplane. The Queenstown ATC tower has no radar facility, because the surrounding mountains are incompatible with that.

The Transport Accident Investigation Commission (Commission) did not investigate further whether the minimum required 1000 ft vertical separation between the 2 aeroplanes was breached, because it was clear that the potential for such a breach was high and that alone was a safety issue that needed addressing.
The Commission's key findings addressed the following issues:
- the weather conditions were not suitable for Pacific Blue to descend below the minimum descent altitude
- the air traffic controller had not ensured that the required minimum separation would be maintained between the 2 aeroplanes
- the Pacific Blue pilots and the air traffic controller had different understandings of what would occur in the event Pacific Blue did not land after circling
- the various publications used by pilots and controllers that described instrument approach procedures and circling procedures were not consistent, which was a hazard likely to lead to misunderstandings between pilots and air traffic controllers
- the circling manoeuvring that is required after a non-precision approach at Queenstown is a demanding procedure that ought to be reviewed for suitability
- a wider review of the Queenstown air traffic management system and operational procedures would be prudent, given the special features associated with operations at the aerodrome and the increasing number of commercial jet aeroplane operations.

The Commission made recommendations to the Director of Civil Aviation (the Director) that he:
- ensure that the current development of a strategic plan for air traffic management and the risk assessment of Queenstown flight operations address the safety issues identified in this report
- eliminate the use of similar titles for different instrument approach procedures to the same runway
- require the procedural and compliance aspects of non-precision approaches at Queenstown to be re-evaluated
- ensure that common operational material published by different organisations be accurately reproduced from the source documents
- require a system to be installed to provide controllers with real-time observations of the weather conditions behind Deer Park Hill.

The Commission identified the following key lessons in this inquiry:
- a pilot must not descend below the applicable instrument approach minimum descent altitude unless certain that the conditions are suitable for a landing
- pilots must understand the operational assumptions in the design of instrument approach procedures, and how those assumptions determine the limits of safe manoeuvring
- organisations that re-publish mutually important operational information from authoritative sources must ensure that the information is accurately reproduced so that all users interpret the information correctly and apply it consistently.
Related Safety Recommendation(s)
012/12
013/12
015/12
014/12
016/12
Location
Queenstown (-45.017500,168.734166) [may be approximate]