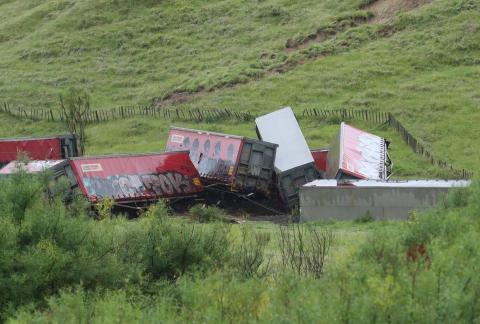 The Transport Accident Investigation Commission has opened an inquiry into the derailment of a freight train just North of Marton, about 11:30pm on Monday 13 December.

The circumstances reported were that the train – a pair of locomotives hauling a long train of freight wagons – derailed from a section of the North Island Main Trunk line where flooding had damaged the line.

The operator reported that one of the locomotives and about twelve wagons derailed and some wagons overturned. The second locomotive and other wagons remained on the tracks

No injuries were reported.

The Commission’s investigators arrived at the accident site early this afternoon and have commenced their initial work recording the accident scene and gathering evidence that could disappear or change – such as the effects of weather and flooding.

A TAIC Protection Order on the accident site and the train track for two kilometres approaching the site has now partly lifted.

The Commission welcomes the facilitation and active assistance from KiwiRail in commencing this complicated investigation.

TAIC’s evidence gathering is broad to support the many routes that an investigation could follow. Our investigators will be interviewing railway staff, inspecting the rail and rolling stock, and the operator’s safety systems for managing hazards and mitigating the risks of flooding.