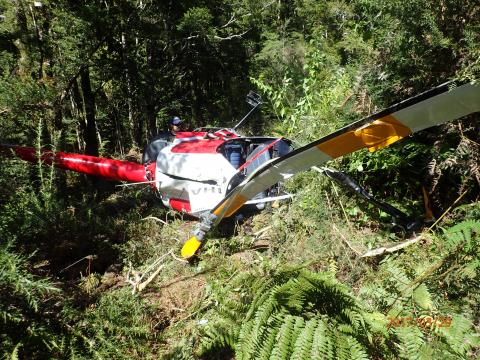 The wrecked helicopter at the accident site. TAIC photo.

The fatal crash of a helicopter on a wooded hillside near Reefton happened after a series of risk factors lined up.

The Transport Accident Investigation Commission today published its Final Report on the causes and circumstances of the crash of a Robinson R22 helicopter on 27 March 2017.

The helicopter was being used for a hunting operation. Shortly after take-off, while it was climbing over densely forested terrain, the helicopter and its slung load struck the forest canopy then hit the ground.

The pilot – the one person on board – was fatally injured and the helicopter was destroyed.

The Chief investigator of Accidents, Aaron Holman, says the Commission was unable to determine conclusively what happened in the final seconds before the accident.

"The helicopter did not maintain a sufficient altitude before it struck the tree canopy and then the terrain, and the Commission's Final Report describes how a series of risk factors aligned to make the accident more likely – including airworthiness, engine power, and flightpath," said Mr Holman.

"The helicopter wasn't airworthy, and it was unlikely the engine was producing its maximum specified power.

"When the Commission's investigators examined the wreckage, they found discrepancies between the helicopter’s logbook recorded operational time and the life of major components.

"The helicopter's hour meter had been disconnected, the main rotor blades were time-expired, and the engine showed signs of wear inconsistent with the hours recorded in its logbook."

The Commission also noted that the pilot was conducting a commercial flight, which was beyond the privileges of the pilot’s private pilot licence.

"Everyone involved in private air transport and recreational flying should understand the risk to the public if an aircraft operator chooses to disregard Civil Aviation Rules for licence category and airworthiness," said Mr Holman

"The Aviation Related Concerns system, available on the CAA website provides a way for the public to raise concerns about this sort of behaviour."

The Civil Aviation Authority’s regulatory control and surveillance of the non-commercial aviation sector broadly aligns with relevant international standards and recommendations. For this reason, the Commission made no new recommendations.

Mast bumping: TAIC's Findings are supported by strong evidence and scientific analysis. There was no evidence of mast bumping in this accident.