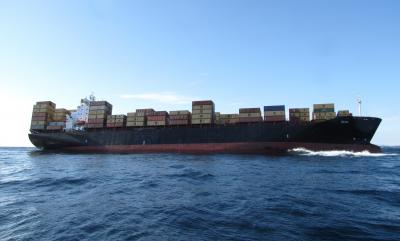 The MV Rena aground on Astrolabe Reef (photograph taken 6 October 2011). Credit TAIC.
Container ship MV Rena grounding on Astrolabe Reef, 5 October 2011
Status
Closed
Occurrence Date
5 Oct 2011
Report Publication Date
18 Dec 2014
Jurisdiction
NZ
The Liberian-registered container ship Rena had left the New Zealand port of Napier at 1020 on 4 October 2011 and was bound for the New Zealand port of Tauranga. The master had given an estimated time of arrival at the Tauranga pilot station of 0300 the next day. The master calculated the estimated time of arrival by dividing the distance to go by the Rena's normal service speed. The calculation did not account for the unfavourable currents that normally prevailed down that stretch of coastline.

The Rena's second mate took over the watch shortly after midnight on 4 October. He calculated that the Rena would arrive at the port of Tauranga pilot station at 0300 at the ship’s then current speed. Times for ships entering and leaving Tauranga Harbour are limited by the depth of water and the strength of the tidal currents in the entrance channel. Tauranga Harbour Control informed the second mate that the latest time the Rena could take the harbour pilot on board was 0300.

The planned course to the Tauranga pilot station was to pass two nautical miles north of Astrolabe Reef before making the final adjustment in course to the pilot station. The second mate decided to reduce the two miles to one mile in order to save time. The second mate then made a series of small course adjustments towards Astrolabe Reef to make the shortcut. In doing so he altered the course 5 degrees past the required track and did not make an allowance for any compass error or sideways "drift", and as a consequence the Rena was making a ground track directly for Astrolabe Reef. Meanwhile the master had been woken and arrived on the bridge to prepare for arrival at the port.

The master and second mate discussed preparations for arrival at the pilot station. The master then assumed control of the ship, having received virtually no information on where the ship was, where it was heading, and what immediate dangers to navigation he needed to consider.

During this period of handover no-one was monitoring the position of the ship. At 0214 the Rena ran aground at full speed on Astrolabe Reef. The ship remained stuck fast on the reef and in the ensuing months it broke in two. The aft section moved off the reef and sank. About 200 tonnes of heavy fuel oil were lost to the sea. A substantial amount of cargo in the containers was lost. The vessel became a total loss on 11 October 2011.

Safety issues that the Commission identified in the wider context included:
- CIEL Shipmanagement S.A.'s oversight of the Rena's safety management system was not sufficient to prevent a high number of port state control deficiencies identified during two port state control "initial" inspections about three months prior to the grounding, and routine violations of some company procedures for voyage planning and navigation
- an independent audit had found that the Philippines' maritime education, training and certification system did not meet the mandatory standards specified in the Convention on Standards of Training, Certification and Watchkeeping for Seafarers 1978 (the STCW Convention)
- the current auditing protocols of the STCW Convention lack the transparency that would assist member states to decide whether other countries' training systems meet the standards of competency required by the STCW Convention, and therefore whether to recognise certificates of competency issued by those countries.

The report also discusses two other considerations that were raised during the inquiry - whether there is a need for ship routing in some form around the New Zealand coast, and how far maritime authorities should go in marking hazards to navigation such as Astrolabe Reef. The Commission identified two issues: first, with regard to shipping, there is insufficient data being collected to make a meaningful analysis of shipping movements around the New Zealand coast; and secondly, with regard to marking hazards, a new type of "virtual aid to navigation" is being used for marking hazards to navigation before this system has been fully tested and endorsed by the International Association of Marine Aids to Navigation and Lighthouse Authorities.

The Commission made recommendations to:
- CIEL Shipmanagement S.A. to evaluate the effectiveness of its safety management system to ensure that the issues identified with that system as applied on board the Rena do not affect other vessels within its fleet
- Maritime New Zealand to promote, through the International Maritime Organization, the transparency of the system for auditing countries' seafarer training systems
- Maritime New Zealand to collect sufficient data on shipping movements around the New Zealand coast, and monitor and control the use of virtual aids to navigation around the New Zealand coast.

The key lessons learnt from the inquiry into this accident were:
- ship managers must ensure that their safety management systems are delivering safe ship operations for every ship in their fleets
- ships' crews must comply with the mandatory requirements and recommended best industry practice for passage planning, navigation and watchkeeping if similar groundings and other equally catastrophic maritime casualties are to be avoided
- countries' maritime education, training and certification systems must be capable of meeting the standards required by the STCW Convention to ensure that seafarers emerging from the system are trained to an appropriate standard.
Related Safety Recommendation(s)
010/14
013/14
012/14
014/14
Location
Astrolabe Reef, Tauranga (-37.540005,176.428328) [may be approximate]