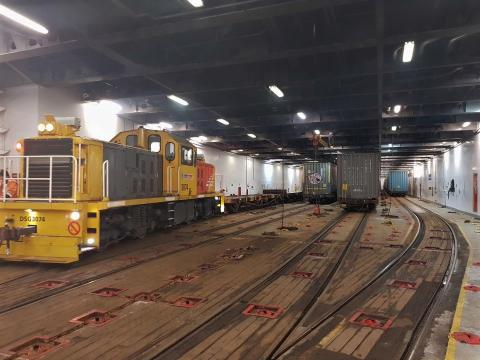 The rail deck on the Aratere - 2019 photo | Credit: CORE Education

The Transport Accident Investigation Commission has opened an inquiry into the causes and circumstances of a rail accident on board the Interislander ferry Aratere while it was berthed at Wellington Port at approximately 11pm on Friday 9 April 2021.

The circumstances reported to date are that one worker was struck by a moving wagon, requiring hospital treatment for the worker. There were no reported fatalities.

Harald Hendel, the Chief Investigator of Accidents, has appointed a team of two investigators.

"The Investigation team have expert knowledge in this field, including marine and rail engineering and maintenance," said Mr Hendel. “They commenced gathering evidence early on 10 April; their initial work will include interviewing witnesses and inspecting the ferry rail deck, and rolling stock, securing and discharging processes.”

--
[As initially reported, subject to change, not official findings].