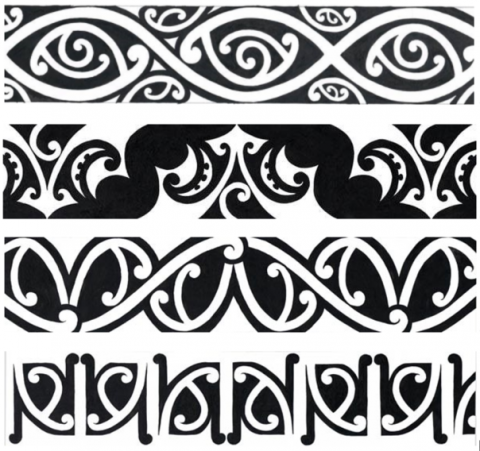 Sandy Rodgers is profiled at the bottom of this page.

The following explanations of the naming and design of the Kowhaiwhai are in her words.

In the process of naming this Kōwhaiwhai I thought carefully about the Transport Accident Investigation Commission's purpose and this image came to mind. The commission is a vehicle or vessel for seeking the knowledge to understand the reasons as to why transport accident tragedies occur and how to prevent them in the future.  I saw it as a ‘waka whai mārama (i te ara haumaru) ’‘Waka whai mārama’ is ‘a vessel (vehicle) in pursuit of understanding’. Waka in modern times means ‘a form of transportation’ a vehicle i.e. canoe, boat, car or train. Here, I have used 'waka' in a metaphoric sense to convey the principal function of the Transport Accident Investigation Commission. Mārama is derived from ‘Te ao mārama’ – The world of light. This refers to the separation of Rangitāne (Sky Father) and Papatūānuku (Earth Mother) by their son Tāne Māhuta (God of man and forests and everything that dwells within) which brought light and thus awareness into the world. ‘Te ara’ is ‘the path’ and ‘haumaru’ is ‘safe or risk free’.  So I saw the commission as a vessel for investigation in the pursuit of understanding in order to guide people down a safe and risk free path.

Within this Kōwhaiwhai I have used the eye motif to represent looking towards the future and watching the path for obstructions. There is an encased double koru design which is the mother and child. This is a symbol of protection, safety and guidance.  The triple koru motif represents the three kete of knowledge of which Tāne Māhuta collected from the highest of the heavens in order to pass on their wisdom to mankind. The continual wave that passes through the entire design is the perpetual line of influence. The succession of humps represent the individual inquiries as they come and go.

I acknowledge Tāne Māhuta in the creation of this Kōwhaiwhai.

‘Ngā hau e whā’ is a term which is often used in the Māori language when talking about people coming together from the ‘four corners’ of Aotearoa.  Literally translated it means ‘the four winds’ of which I imagine aircraft navigating through.

The design represents the sky, the clouds, the winds and our movement through them. There is a manu (bird) form soaring through the sky which represents the various aircraft that move through Aotearoa’s ‘long white cloud’. The letter ‘A’ is also present in the design which literally stands for the word ‘Aviation’, the mode of transport of which this design was created to represent.

I acknowledge Ranginui (Sky father) and Tāwhirimātea (God of wind) in the creation of this Kōwhaiwhai.

‘Ara Wai’ represents the various bodies of water within Aotearoa of which the many different types of ships will navigate their way through.

The sections of waves that flow across the entire design represent the different bodies of water. The ‘V’ shape is the prow of a ship as it passes through the water creating the wake as it moves. The letter ‘M’ is also present in the design which literally stands for the word ‘Marine’, the mode of transport of which this design was created to represent.

I acknowledge Tangaroa (God of the sea) in the creation of this Kōwhaiwhai.

Rerewhenua - Flowing across the land

‘Rere’ is to flow or fly. ‘Whenua’ is the land. I see the movement of trains across Aotearoa as a smooth, fluid movement passing over the land.

The design represents the actual rail tracks over which the trains are travelling. The koru forms represent the earth, land and flora in which the train will pass over/through. The letter ‘R’ is also present in the design which literally stands for the word ‘Rail’, the mode of transport of which this design was created to represent.

I acknowledge Papatūānuku (Earth Mother) and Tāne Mahuta (God of man and forests and everything that dwells within) in the creation of this Kōwhaiwhai. 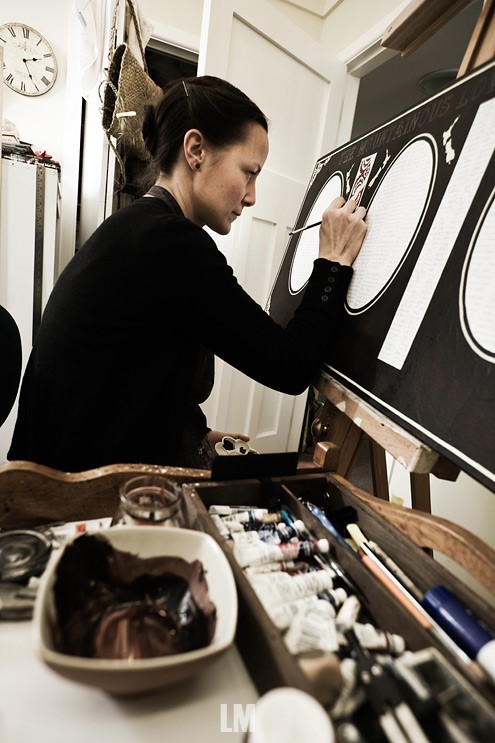 Sandy’s art work has a strong design base and often includes original Kowhaiwhai designs. Sandy’s first success in creating Kowhaiwhai was when she was 11 years old and that first attempt hung above her school principal's office. From this point onwards Sandy has keenly researched and created Kōwhaiwhai of which have been exhibited in London and Spain, as well as throughout Aotearoa (New Zealand).

Sandy’s credentials include an honors Diploma in Fine Arts, two years spent learning traditional Maori arts under artist Erenora Puketapu-Hetet and her family in Waiwhetu, and over 22 years of solo and group exhibitions.