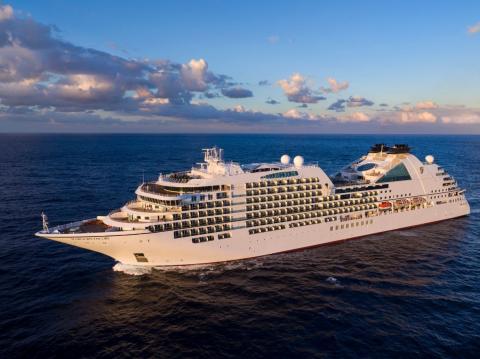 The Transport Accident Investigation Commission has published its Final Report on the February 2017 accident where the cruise ship Seabourn Encore broke from its mooring at PrimePort Timaru.

Chief Investigator of Accidents, Captain Tim Burfoot said that during the day, the wind grew stronger and changed direction quicker and earlier than predicted, pushing the ship away from the wharf

“The ship’s mooring lines progressively failed, as did the mooring bollards on the wharf, which tore away from the wharf. The ship’s stern swung across the harbour and collided with a bulk cement ship,” said Capt. Burfoot

“The Commission found that the bollards failed because their fastenings to the wharf, and the underlying wharf structure, could not take the force from the ship’s mooring lines.

“The Seabourn Encore crew took prompt action, establishing power to propulsion systems, lessening the impact and very likely reducing the consequences. There was damage to the Seaborne Encore’s wharf and to the hulls of both ships, but neither ship’s stability was affected, and nobody was injured.”

“Neither port staff nor ship’s crew were ready for the predicted change in the weather because the port company didn’t follow its own response plan.

“The Final Report shows how safe and effective mooring of ships depends on port companies knowing the safe working loads for their mooring infrastructure. They also need to follow strict procedures for monitoring and communicating weather conditions to the crews of ships that are prone to high winds.

Following the Commission’s recommendations, Maritime NZ has committed to publicise the report’s findings to all harbourmasters and port operators, emphasising the risks associated with securing large vessels that may exert unexpectedly heavy loads on port infrastructure.

Locally, PrimePort Timaru is assessing risks for vessels intending to use the port, including whether berths are safe for vessels to be alongside; operational limits, and any additional measures needed