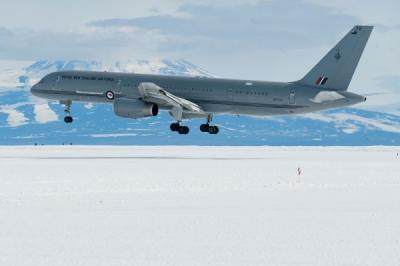 The flight departure had been delayed while the flight crew gathered additional information on the forecast weather conditions at Pegasus Field. The Boeing 757 aircraft did not have sufficient fuel capacity to complete the return trip without refuelling at Pegasus Field.

A point of safe return had been pre-calculated. The aeroplane would only continue past this point if the weather conditions at Pegasus Field met certain criteria that would allow the aeroplane to land safely; otherwise it would return to Christchurch.

The crew received regular and additional weather observations and forecasts from staff at the United States Navy's Space and Naval Warfare Systems Command's Office of Polar Programs facilities at McMurdo and in Charleston, USA. Weather observers at Pegasus Field were noting the existence of a fog bank about five kilometres from the runway. The crew received assurances from the forecasters that the weather was forecast to improve. Based on these assurances and using the crew members' collective experience, both recent and from previous seasons, the crew made the decision to continue past the point of safe return towards Pegasus Field. About 20 minutes thereafter, the crew received the first of several weather observations that conditions had deteriorated and that a fog bank had enveloped the runway and its approaches.

With insufficient fuel on board to return to Christchurch, the crew was committed to continuing to Pegasus Field. There was no other safe alternative aerodrome in Antarctica where the aeroplane could land. The crew made two attempts to land at Pegasus Field but the restricted visibility prevented them gaining the required visual reference with the runway markings and lights. After the first attempt the crew decided to hold to see if the weather would start to clear. After holding for nearly two hours with no improvement in the conditions, the crew decided to make a second approach using a lower "minimum descent altitude" than the published minima in an attempt to increase the chance of becoming visual with the runway. A member of the flight crew caught a glimpse of runway markings just as the approach was aborted and a missed approach procedure was initiated (a "go-around").

With dwindling fuel reserves and conditions deteriorating the crew elected to make a third attempt at landing. They again used the lower "minimum descent altitude". When the aeroplane reached about 110 feet above the runway , the crew saw the runway approach lights and markings and was able to make a successful landing in near-whiteout conditions. There was no damage to the aeroplane and no-one was injured.

The Commission found that the observed and forecast weather conditions as reported to the crew met the criteria for the crew to continue past the point of safe return. It also found that, given no safe alternative, the actions of the crew in proceeding below the allowable minima for the aerodrome were appropriate, and that the crew had taken all reasonable precautions to mitigate the risks involved in doing so.

However, the Commission found that the risk assessment undertaken when considering the suitability of the Boeing 757 aircraft type for Antarctic operations had not adequately taken into consideration five key points:
- the potential consequences of the weather deteriorating were elevated for the Boeing 757 aircraft because of the lack of alternative approach procedures and aerodromes suitable for the aircraft type
- the weather criteria for an aeroplane passing the point of safe return should consider the presence of low cloud and fog below the main cloud base as a limiting factor
- there is an increased likelihood of weather conditions deteriorating below minima early in the summer season
- the accuracy of instrument approaches should be treated with caution prior to re-calibration flights being conducted early in the summer season
- the Royal New Zealand Air Force Boeing aircraft is capable of completing only one type of instrument approach in Antarctica.

The Commission recommended that the Chief of Air Force review the risk assessment for using the Boeing 757 aircraft for Antarctic flight operations, taking into account these matters and any other matters not considered during the initial risk assessment.

The key lessons learnt from the inquiry into this occurrence were:
- Effective crew resource management enables a crew to perform as a cohesive unit and provides the best opportunity for a safe outcome. This incident demonstrates how a properly trained crew was able to function effectively in demanding circumstances and make a safe landing.
- An essential element of risk management is the continuous review of the relevance of the original assessment and its context, hazards and mitigations. This is especially important when there are changes in the circumstances or conditions of the assessment to ensure that it remains valid and provides the appropriate level of safety.
Related Safety Recommendation(s)
024/14
Location
Antarctica (-77.966700,166.516700) [may be approximate]